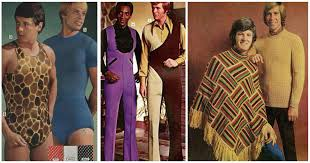 It is the decade that is held up for its Glam music and Punk Rock. It was the hangover ten years after the expressive nineteen sixties when tie dye and colour started to creep into the mens fashion alsong with Asian style and the strong North American ethic. We tend to forget that it was also a decade that saw 3 day weeks, huge industrial action, the beginnings of the years of the “Troubles” in Northern Ireland and the general sense that the country was on the verge of civil revolution. Yet all that we tend to focus on is ABBA, the Sex Pistols and It’s a Knockout.

For men flared trousers were suddenly thrust into the limelight. You couldn’t move for them in the shops and it seems that a straight pair of trousers were totally unavailable. However the sheep skin coat was also there and crushed velvet too. Men could start to be flamboyant even if they really didn’t want to be. Disco music brought lame and gold so that Men could even be shiny if they wanted to.

David Bowie became androgenus so that Men looked like women and even Mike Jagger and Rod Stewart started to wear more femine styles. Eye liner was starting to be not just for women either. Punk brought some relief with it’s jeans and leather jacket rock look. This too began to be subverted with ripped clothing that was “fixed” with safety pins. Red and Black were the predominant colours but as it started to become a uniform it began to kill the spirit of the sound. It is were designers like Tommy Hilfiger Menswear were born so better things were coming. You can see the improvement at EJ Menswear.