Christmas is coming and with it the preparations for the most endearing holidays of the year. Stay to spend the holidays at home is something that is increasingly falling behind and now the fashion is traveling to live Christmas in other cities. To enjoy Christmas there are numerous destinations where these holidays have an importance or a special celebration. In this article, we give you 10 destinations to celebrate a different Christmas.

1. Meet Santa Claus, the illusion of children and adults

One of the central figures of Christmas is Santa Claus and he lives in Lapland, a region of Finland. The great illusion of children and some older ones are located in one of the coldest places in the world, where the North Pole dividing line passes.

Napapiiri, very close to the city of Rovaniemi, capital of Lapland, is a fairytale place with wooden houses painted red and its magical toy factory or the post office where children’s letters arrive, all in an environment idyllic forest with pine and birch trees.

You will also know how many kilometers from your city you are, as there are signs that indicate the distance to the main cities of the world. And we must not forget that Santa Claus himself is happy to greet tourists and congratulate parties in all languages.

In Rovaniemi, you can also enjoy a wonderful landscape with snowy mountains, reindeer, and sleds that thousands of people decide to visit every Christmas.

Another Christmas tradition something more current purchases. And what better place to spend the money saved for Christmas than New York, the capital of shopping, fashion and the Christmas offers of the “Shopping Week”.

The most famous city in the world is tuned in these dates, which many think are the best to travel to the United States. The great decorations dazzle the city that never sleeps, the New Year’s Eve in Times Square is one of the most impressive in the world and the giant tree of Rockefeller Center takes Christmas as it started on the day it is illuminated.

Besides, who has never dreamed of taking a carriage ride through Central Park like in the romantic American movies or ice skating around the most famous fir in the world?

New Year’s Eve in New York is something worth seeing; since 1904 thousands of people are quoted in Times Square to watch the ball of the year change fall, all in an atmosphere of fireworks, confetti, and snow.

For the quieter is the pyrotechnic show of the Brooklyn Bridge. And most athletes can enjoy the Midnight Run of Central Park. The San Silvestre of New York is the mythical race of the American city that many runs disguised. 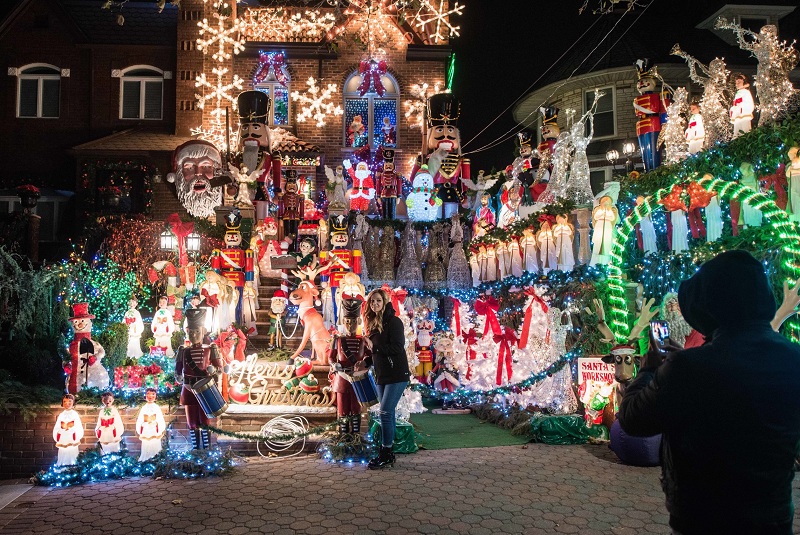 3. Vienna, concert, and party in the streets

The New Year’s Concert of the Vienna Philharmonic Orchestra makes the Austrian capital a must for thousands of people from all over the world. Getting a ticket to enter the Wiener Musikverein is something almost impossible, are awarded by lottery and football style, many people try to get one in the resale that if, at exorbitant prices.

For the rest of the mortals, it is also something special to see the concert on the giant screen of the Vienna City Hall Square.

But all of Austria is not waiting for the concert and the Austrian celebrate the new year with the Silvesterpfad, where they dance and taste typical delicacies while drinking “punch” in a World Heritage Site for UNESCO that are the streets of Vienna.

The Austrian landscapes at Christmas are worthy of appearing on Christmas postcards and for ski lovers, Austria is a paradise for this sport. And the cities are full of Christmas markets that began more than 700 years ago in which you can find all kinds of ornaments for the most flirtatious dates. 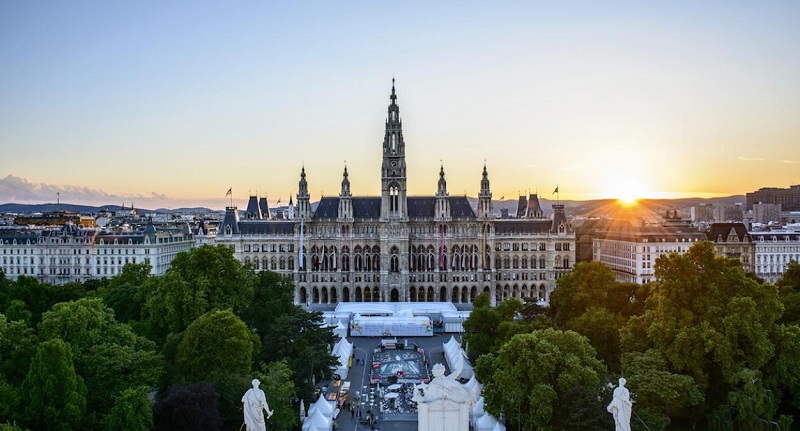 Italian Tuscany is one of the favorite destinations for lovers throughout the year, its relaxed air and good life attract thousands of tourists, but at Christmas, the Italian region acquires a charm that has no other place.

Cribs and living cribs fill the streets of Sienna, Florence or Arezzo, where shops are decorated to live Christmas with exquisite Italian taste. Each Italian region, which already has important markets during the year, celebrates its typical Christmas markets with special enthusiasm.

Nearby you can also enjoy this time in the Italian capital. Rome is a key place for many Catholics who take advantage of Christmas to visit the Vatican, listen to the Pope’s message and witness the processions celebrating the birth of the Child Jesus.

Rome is filled with fireworks and the free New Year’s concert is more special because it takes place in the Imperial Forum, next to the mythical Roman Colosseum. The celebrations are shared by the typical Roman squares and the facade of the Teatro Marcello is a witness to the spectacle of lights and the desires that people ask and send by message to the big screen of the square. 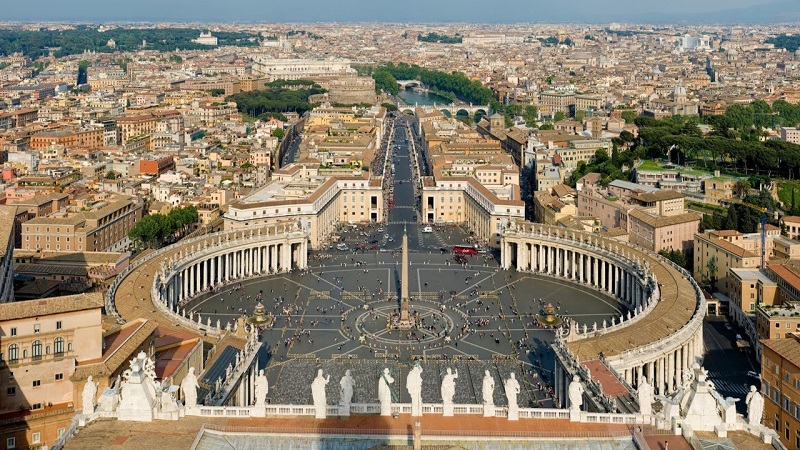 5. Christmas for the romantics

The most romantic city in the world is also one of the destinations chosen by thousands of people to enjoy the Christmas holidays. Christmas in Paris is impressive, the smell of chestnuts is noticeable as people stroll through decorated Elisha Fields or while taking pictures in front of the iconic Eiffel Tower brighter than ever with its ice skating rink just below.

Do not miss the impressive giant Christmas tree located at the entrance of the Notre Dame cathedral and the Parisian streets are filled with carousels, merry-go-rounds and flea markets.

The stores make Christmas representations with dolls that move, the Lafayette Gallery and the Printemps Department Store capture the attention of all tourists and Parisians.

For children and not so children Christmas at Disneyland is a place full of color that takes visitors to an authentic fairy tale. The cavalcades in which Santa Claus is present and the Christmas shows make every day more people who come to the most famous amusement park in Europe. 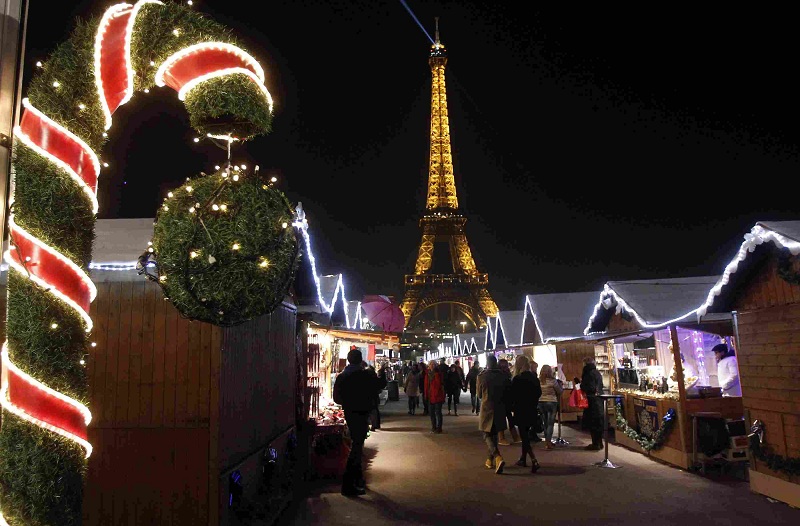 6. For the most believers, Jerusalem

The exact place where it is supposed, the Baby Jesus was born is one of the most Christmas places. This time it is not about its ornaments, its lights, and its parties, but about the religious connotations of the party.

For those who want to experience the festivities in a different way, Jerusalem is a special place to visit the Manger Square, where the oldest church in the world is, the Basilica of the Nativity of 335 AD Around 15,000 people and pilgrims visit Jerusalem at this time, where you can witness the mass of the rooster of the Church of Santa Catalina or the Field of the Shepherds, where the announcement of the birth of Christ was given. 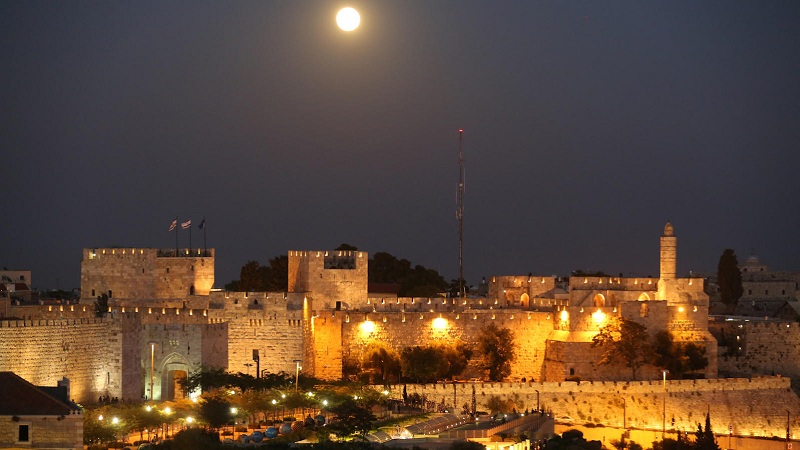 On the other side of the world, Christmas is celebrated in a much more summery climate. The, sometimes, forgotten Australia remembers Christmas and lives it in a different way with its atypical traditions.

Living the Christmas holidays sunbathing on the beaches of Oceania is something that many probably dream of. To enjoy the rest away from home and get rid of the stress of day to day is something appetizing but if you can also know the traditions of a country so distant, better.

Swag Man is a man who distributes gifts to children, is dressed in a hat, blue shirt and shorts and his traveling companion is a kangaroo. It sounds like a summer Santa Claus with some very original companions. And it is that the reindeer in Australia would not acclimate very well.

The Christmas night in Sydney Bay is celebrated with fireworks, beach barbecues and partying until dawn. 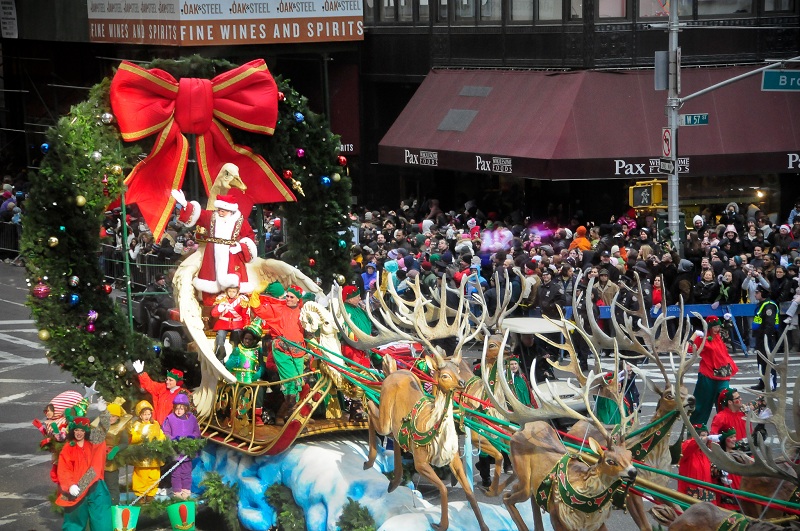 8. London, more spectacular than ever

The British capital is one of the most visited destinations at Christmas. The most cosmopolitan city in Europe celebrates the Christmas holidays in style, fireworks launched from the South Bank, next to the London Eye that can be seen on the Thames shore, to the decorations of the entire city, more impressive in the Harrods and the largest Christmas tree in London in Trafalgar Square.

The London party is celebrated in the pubs and nightclubs and on the first day, there is the biggest New Year parade in the world, with artists from all over, acrobats, dancers, and musicians. 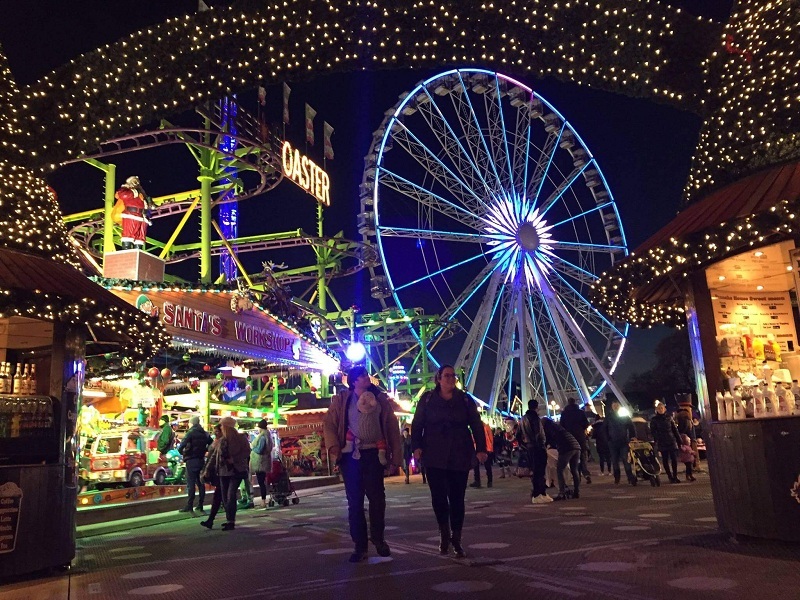 9. A Christmas under the level of the North Sea

Amsterdam redecorates its streets and canals in a magical way for the occasion, all the trees illuminate the streets at night and you can spend your time immersed in the Christmas markets.

The city is one of the most active during the year, with activities of all kinds that make it one of the most visited, and Christmas is not for less. Concerts in churches, typical choirs on the street, the possibility of riding on decorated bicycles.

And, of course, Berlin is the last of the chosen ones to enjoy the Christmas days. Months before the expected dates arrive, the German capital is already beginning to decorate itself and fill its streets with huge European markets.

German gastronomy is a fundamental pillar in these markets, honey bread, toasted almonds, mulled wine with cinnamon and live geese for roasted cooking are some of the delicacies that can be found on any street in Berlin.

Ice skating, dances, and dinners in hotels, transfers in a limousine to enjoy the fireworks and pubs in which to spend the night are several of the activities that the German city offers its tourists.

We hope you will like these destinations to visit during Christmas. We want your comments and suggestions to improve our ideas. Thank you and have a wonderful Christmas.

You may also like to read about couchtuner movies for couchtuner,entertainment.

How To Twist The Plate For The Teeth?

How to change your life with 23 simple keys