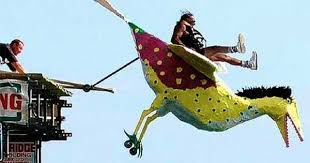 In the summer of 1971 several people in the seaside town of Selsey, who must have been starved of entertainment were bored. They decided that the only way that they could relieve this boredom was to throw themselves of Selsey Pier using a variety of ingenious methods to do so and measuring whomsoever could get the furthest distance. This was done all in the name of charity of course. There was only one rule, they had to use human powered devices nothing mechanical was allowed. This basically meant running as fast as you could then leaping off the end of the Pier flapping homemade wings or trying to use a glider. The idea developed a bit and eventually a ramp was constructed so that wheeled ideas could be incorporated.  If you are thinking of entering a similar competition then you could find a beautiful bath from wilsonsyard.com who supply Cast Iron Baths Ireland area. 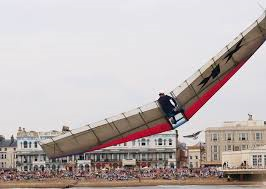 Named the Birdman rally it was held there until 1978 when for safety reasons the Pier at Selsey could no longer be used. Undeterred, the organisers moved the event down the South Coast, the events spiritual home, to Bognor Regis. This was the case until 2008 when a shortening of the Pier meant that the water depth was not sufficient to break the fall of the people landing. It was moved to nearby Worthing for two years and the two towns alternated. Bognor has taken on the mantle as the organisers in Worthing have cancelled in the past due to choppy seas. In this litigious age the event is a health and safety nightmare for local councils and organisers.

The event draws quite the crowds and is good money spinner of tourists to attend as the weekend event is thought to swell the town’s population by 30%. Records were not held in the Selsey years but they were from 1978 if intermittently. In 2013 Mr Ron Freeman, a frequently successful entrant, broke the record at Bognor that still stands of 206.4 metres. The event is not without controversy. Mr Steve Elkins in 2009 claimed he had exceeded the 100 metres distance but was recorded as landing at 99.86 metres by the organisers. Mr Elkins sued the organisers, who could have done without the bother in what is meant to be a fun and for charity contest, over the result. As the prize money stood at £30,000 for anyone going over 100 metres you can understand Mr Elkins position to some degree. The judge was not convinced Mr Elkins had crossed the line and ruled in the organisers favour.

There has been no Birdman Rally since 2015 and the whole thing has been somewhat taken over by the Red Bull Flugtag sponsored events.