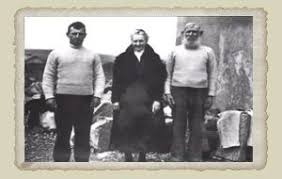 A brief history of Aran sweaters

The Aran Sweater takes its name from a set of islands off the west coast of Ireland, at the mouth of Galway Bay, known as the Aran Islands. The Islanders were fishermen and farmers and it was these Aran Sweaters that kept them warm on their fishing trips.

Aran sweaters have been, and continue to be, a representation of the lives of knitters and their families.  The patterns used were often a guarded secret and were passed down from generation to generation in the clans. These Aran sweaters have also been used to help classify fishermen’s bodies washed up on the beach after an accident at sea. An official database of these historical trends was created and can be seen in the museum.

People around the world purchase these sweaters due to the intricate designs on the front, without really knowing that each design has a meaning behind it. They are like codes identifying the clan that the individual belonged to and a little about its history and its location on the Isles of Aran.

The cultural representation of the Isles community is now a popular fashion item and you can find many options available for men, women and children and with a number of different knitted stitch patterns. Knitting patterns back in the 1980s and 1990s would often show entire families wearing these sweaters, keeping the tradition of them being very much a family and wider community form of cultural identity.

Men’s Formal Dressing – How to Wear for a Business Meeting